Eustachian Tube Problems Can Cause Ear Discomfort and Hearing Loss

We rely on our ears to hear the tiniest of noises, but most of the time we don’t give these hardworking body parts much thought. In fact, the part of the ear that we can see is just the tip of the iceberg—a complex system that begins with a sound and ends as a perception in the brain. But if someone experiences a blockage in the ear, that delicate system is at best interrupted, and at worst, thrown into chaos.

How the Eustachian Tube Functions 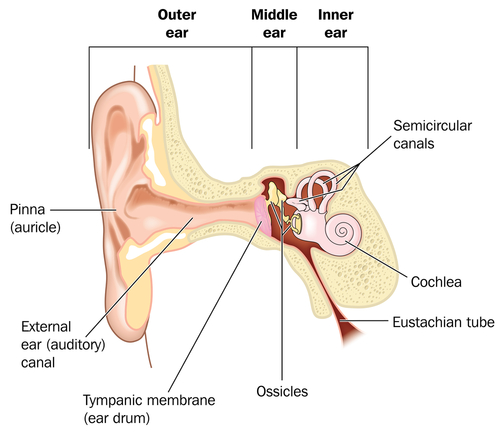 The inner ear is sensitive to pressure changes and requires a valve that can open and close to equalize air and fluid imbalances. This valve is called the Eustachian tube. There is one Eustachian tube in each ear, connecting the middle ear to the back of the throat. The tubes are about an inch long, and the narrowest part is the end that connects to the middle ear.

The middle ear is normally filled with air, allowing sound to flow through to the brain. When a person swallows or yawns, the Eustachian tube opens briefly, restoring air that has been absorbed by the middle ear lining and equalizing pressure in the ear. If the Eustachian tube cannot open, a person may suffer hearing impairment, ear pain, a sensation of fullness in one or both ears, tinnitus, and other symptoms.

There are many ways people can prevent Eustachian tube problems associated with flying, including:

NOTE: Patients who have had a middle ear ventilation tube (PE tube) placed in their eardrum (tympanic membrane) should not need to follow any of these precautions.

The most common causes of Eustachian tube malfunction are blockages, such as earwax or foreign objects pressing against the opening of the valve. If the obstruction is not removed, fluid may begin to build up in the middle ear (a condition called serous otitis media) and can eventually result in a painful ear infection. In some cases, the opposite occurs: the Eustachian tube remains open instead of closed (called patulous Eustachian tube). Patients with this condition may hear an echo or a ringing in the affected ear, and may suffer a “full” feeling in the ear even though the tube is not blocked.

Blocked Eustachian tubes may cause a range of symptoms, including:

Tubes that are blocked due to swelling, such as from a cold or allergies, will often reopen on their own once the swelling has gone down. However, if the tube remains blocked for a prolonged period of time, fluid may collect in the middle ear space and cause an infection, a painful condition known as otitis media. In this case, patients may need antibiotics to treat the infection and relieve the pressure in the Eustachian tubes.

Any Eustachian tube problems that cause hearing impairment should be evaluated by a hearing care specialist as soon as possible. A hearing provider will look into your ears to find out if there is a buildup of earwax or other obstruction causing the problem. If so, blockage removal can alleviate the pressure and open the valve almost immediately. Call us today at 866-517-4415 to schedule a hearing examination at one of our many convenient Florida hearing aid locations!